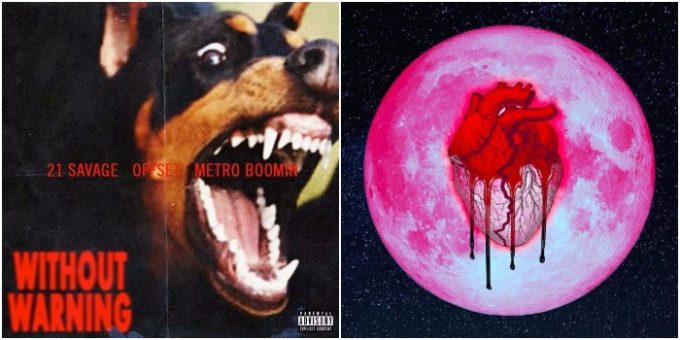 UPDATE (Nov. 3): The final numbers have been announced. Chris Brown’s album moved approximately 56k copies in the first week, where he had three days of tracking sales because of a Tuesday release. 21 Savage, Offset & Metro Boomin’s Without Warning did 48k.

Halloween saw special releases from Chris Brown and 21 Savage, Offset & Metro Boomin which were put out on a non traditional day of Tuesday. The first week sales projections for both are now here.

21 Savage, Offset & Metro Boomin’s album Without Warning, which literally dropped without any warning is set to move 45-50k copies in the first week with 8-10k out of that expected to be in pure sales. The album is looking at a top 3 position on the Billboard 200 chart this week. Country star Kenny Chesney’s new live album Live In No Shoes Nation is projected to hit number 1 with 210-220k, fueling from a attractive ticket bundle offer.

Chris Brown’s Heartbreak On A Full Moon has been in the news for two reasons — the smashing singles it has spawned but more so for the number of songs it contains (45). At 2 hours and 39 minutes, it’s one of the longest running albums in recent memory. Chris has also been desperately asking fans to stream the album, most specifically the singles so sufficient streams can be added to first week sales.

But it looks his strategy of putting out an album of such length in hopes of gathering massive numbers is not working as HDD projects it will move just 40-45k copies in the first week (21-24k pure). It may not even hit the top 5 of Billboard 200 this week which is quite disappointing for the singer’s standards. It will also mark the lowest first week number of his career so far.

Billboard counts 10 downloads of a song as one album sale and 1,500 song streams from an album as one album sale as well so a lot of artists have been over-stuffing their projects. But Breezy won’t be as lucky as someone like Drake whose 22 song album More Life topped the charts earlier this year with over 505k in the first seven days. These new releases from Chris Brown and 21 Savage/Offset/Metro Boomin will also be competing with new projects from Big K.R.I.T., Ty Dolla Sign, Yo Gotti and Yelawolf.