Hopsin and his Australian ex girlfriend Alyce have had a troubled relationship in last couple of years. It became dangerous when last year, Hopsin was accused of assaulting her in Sydney. The rapper, whose real name is Marcus Jamal Hopson, was also jailed for some time for the incident. He reportedly also had problems getting back into the country (where he has a big fanbase) following the legal trouble.

Hopsin publicly announced that he was done with her in an Instagram post almost two years ago where he called her “a gold diggin plastic surgery b*tch looking for fame.” The post has since been deleted but you can see a screenshot below. 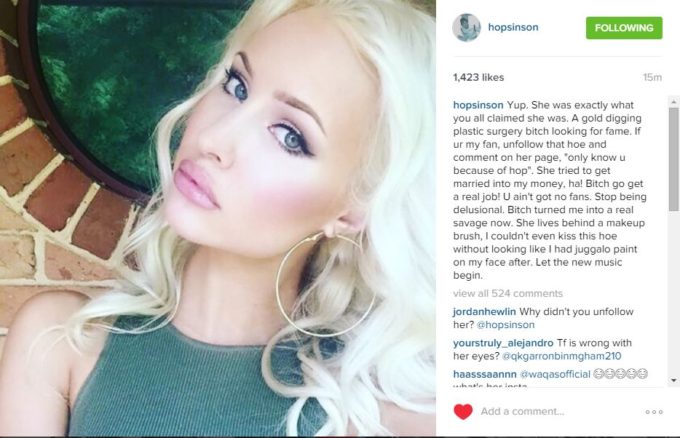 The L.A. based rapper has released a new album No Shame tonight which features the ninth installment of his controversial song series ‘Ill Mind of Hopsin’. In the song, he attacks his ex-girlfriend over the past incidents and blames her for ruining their lives by not letting him meet their son. The emotional video features lookalikes of his son, former girlfriend and her parents as Hopsin tunes in from the television set to express his frustrations. Watch it below.