As it has now been established, the photo is an undoctored image of Drake wearing a black face, taken during a photoshoot with photographer David Leyes. This has obviously offended a lot of people. But as the story is emerging, it has been discovered that the particular photo was originally part of two images stitched together, as posted above.

The photos seem to have been shot sometime in 2008, before Drake’s stardom, in association with the Toronto-based brand Too Black Guys. In the shoot, Drake is seen wearing “Jim Crow Couture” from the label’s 2008 lookbook. According to the brand’s website, their goal is to “represent the black experience in an unapologetic way.” 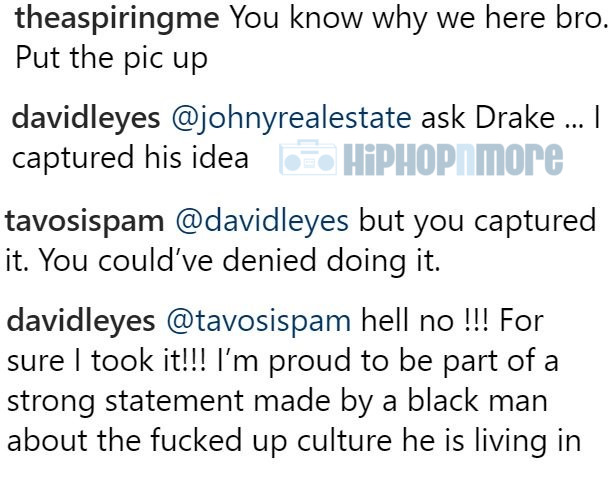 Some fans have pointed out that Pusha intentionally used only one image to put a negative spin and earn some extra points in the beef, while other fans are deeply offended by the image. Leyes, who originally shot the photos, however seems to be siding with Drake at the moment. He replied to a few fans on his Instagram (which has since been set to private) to explain his side of the story. “Ask Drake.. I captured his idea,” he first said. When another person told him that he could’ve denied doing the possibly offensive shoot, he came to Drizzy’s defense: “hell no!! For sure I took it!! I’m proud to be part of a strong statement made by a black man about the f*cked up culture he is livin in.” See the screenshot of the conversation above.

Pusha T also posted the photo of his song’s artwork on Instagram which seems to have been taken down at Leyes’ request as he was seen on Twitter asking Pusha’s manager Steven Victor to remove it.

Lupe Fiasco has also offered a similar theory that the two photos shot together are somewhat of an artistic impression. 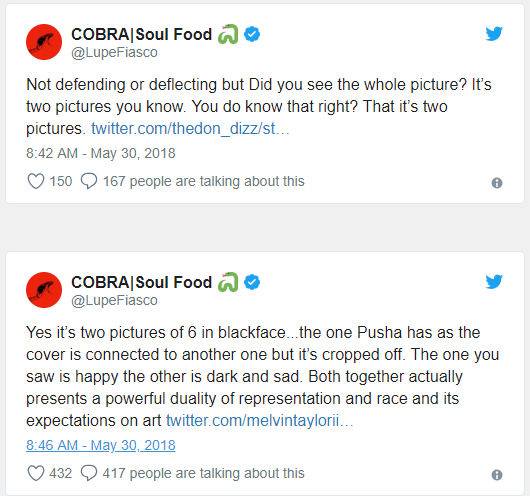 What are your thoughts on the situation? Let us know in the comments section.

UPDATE: Drake has released a statement regarding the black face photos (see it here).