Spotify’s RapCaviar playlist has become an important analytic factor in terms of establishing a hit in the streaming-heavy times we are living in. Today, the platform is celebrating the 5th anniversary of its flagship playlist.

Over the past few years, being featured on the playlist has become a goal for many artists and labels. It is usually left to the editorial team at the company who decides which songs deserve to get the look. Migos, Lil Uzi Vert, Rae Sremmurd, Lil Baby and Roddy Ricch are few of the names who have gained much advantage in propelling their careers due to the algorithm magic of this playlist.

“We are so proud to celebrate five incredible years of RapCaviar,” said Carl Chery, Spotify’s Creative Director of Urban Music. “It’s been amazing to be able to support so many artists that have helped make hip-hop one of the most exciting genres in music and we look forward to seeing RapCaviar continue to push the culture forward and be THE destination for hip-hop discovery for many more years to come.”

Spotify has also shared some key stats over the years for their popular playlist, including the most streamed artists and songs. Cardi B, Nicki Minaj and Rihanna are the top three most streamed female acts in that order while Drake, Future and Travis Scott are the top streamed male artists. Take a look at the info-graphic below which also lists the top songs per year and the most steamed songs overall since 2015. 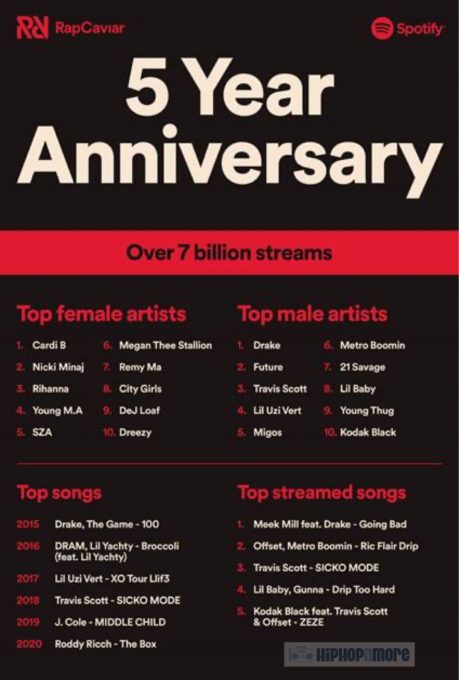