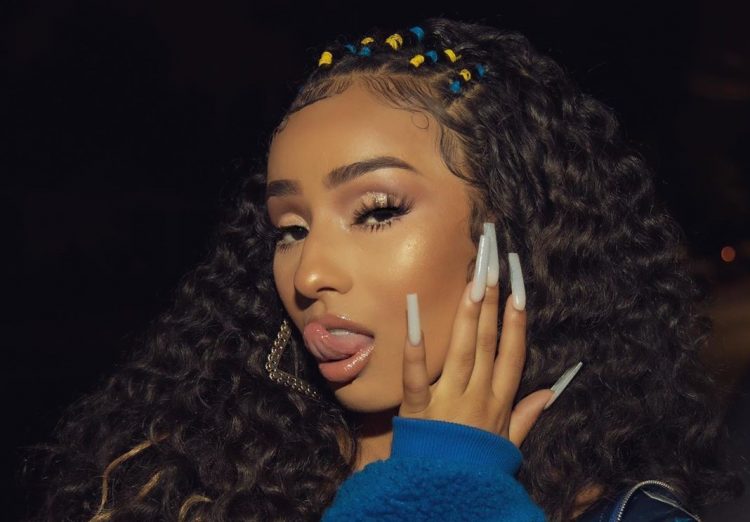 We’ve seen a prominent rise in female rap artists in the last couple of years. Artists such as Cardi B and Megan the Stallion have become household names, what feels like overnight. With emerging rappers like Kash Doll, Mulatto, Flo Mili, and many more — the competition has only gotten more fierce. However, Using social media to create an icon-like presence, 22-year-old Rubi Rose became a fast fan-favorite in the Hip-Hop community.

In July, she made waves with her OnlyFans account, raking in over $100k in revenue from subscriptions. “Remember when yall made made fun of me for not getting a flight back? Now a bitch might buy a plane,” she tweeted to her 300k followers.

Rememeber when yall made made fun of me for not getting a flight back? Now a bitch might buy a plane 🤣 …. pic.twitter.com/I8Ji4CnoIm

Having already launched a successful modeling career, the Kentucky native has ventured to a new lane — music. With hopes of becoming the next “IT” girl, the HitCo-signed artist has used 2020 and the Covid-19 quarantine period to focus on her craft. So far, she’s dropped two singles this year in anticipation of her upcoming untitled debut: ‘He In His Feelings‘ and ‘Pogo‘ featuring K. Camp. She also appeared on Wiz Khalifa’s ‘POV’ off of The Saga of Wiz Khalifa released last month.

HHNM recently spoke with Rubi, discussing her upcoming debut, the producers she’s been in the studio with lately, her influences, her transformation from social media influencer to music artist, how she wants to make an impact in today’s rap game and more. The conversation below has been edited for clarity.

You’re becoming one of the hardest working women in the business. From your modeling career to your social media influence. Your music career has been on fire, and you just recently appeared in the video for ‘WAP‘ with Cardi B and Megan the Stallion. How are you feeling throughout all of this?

It was crazy. It was crazy. Cardi B and Megan are some of the top female rappers. And for them to show love and Cardi B to compliment me on things — it was really nice of her. The whole situation is nice.

How did your cameo in ‘WAP’ come about?

Pretty much, Offset DMd me and then pitched to her publicist, and then I said yes, of course, it’s Cardi B.

That must’ve been pretty amazing.

And with how you deal with social media, it must’ve been an adrenaline rush for you.

Hell yeah, it was very exciting. One of the top moments of my career.

With your debut album around the corner, are there any chances to see Cardi or Megan on your debut? Or is that top secret?

I mean, nothing is top secret. But no, they’re not. Let’s speak it into existence, hopefully, the next one. Or sometime we’ll collaborate.

Let’s hope! Can we get a sneak peek as to who may appear on the project?

I can’t even release that. I don’t even know what songs are even going to be on it, to be honest.

Talking about the debut album, Is there a possible title and release date in the works?

No, every day it’s something new. Just a new idea from somebody gets tossed up, so honestly, I have no idea. When it’s about to come out, I’m out the loop.

What has the recording process for your debut been like?

It’s been good, especially during the quarantine and stuff. I’ve been in the studio a lot, there’s nothing else to do. I’ve been pumping out a lot of songs, I’ve been doing a lot of features, I got a music video dropping with Wiz dropping (it’s out now). I’m excited. I have a lot of other features I’m doing. The recording process has been good.

Good to hear. Your latest single, ‘Pogo’ with K Camp is an absolute banger. How did that track come to fruition?

I put a snippet of it the day after I made it on Instagram, asking who I should put on this? And he likes, messaged me saying he was in Atlanta, so we linked and we did the song. It was good.

What producers may we see on the project?

Ok gotcha. With your debut, what do you hope to tell the world about yourself? How do you want the world of Hip-Hop to view you?

As the IT girl. And like, I’m me. I’m not scared to be me. I’m unapologetically the it girl and that b*tch.

So you pretty much ready to take over the rap game. Would you consider your ultimate goal of entering the rap game?

Growing up, what artists have inspired you and you feel influenced your style?

I wanna say, Nicki Minaj and Foxy Brown. Well, those are the female rappers I look up to, but I also like Drake, Gunna, Future.

Do you feel women of color are under-protected in the industry? What changes can the industry make to help these women have a voice?

After the Meg situation, I definitely do. And just other situations in general. Black women are in reality we’re like the strongest, but we are the most attacked, or not liked or not looked for. I think as an industry we can listen and take women more seriously. There are so many misogynistic people in this world. Like, just be nice. Just be nice.

Do you think women in Hip-Hop are more respected now than they are, say 15 years ago?

How do you hope to use your influence in the future as you excel in the music industry?

I really just want to make girls feel good about themselves. I wanna make b*tches feel confident, love themselves, and give them the motivation to be the boss b*tches they are. I also want to let them know that they don’t gotta answer to no n*gga. Basically, I just do it for ladies.

I’m loving and caring, but I’m also gangsta and about my money. I’m promiscuous, but I also know my worth.

What do you want the world to know about Rubi Rose today?

I want people to know that I have layers just like everyone else. I’m a real raw b*tch, but I’m also intelligent and cultured. I’m loving and caring, but I’m also gangsta and about my money. I’m promiscuous, but I also know my worth. I have depth, it’s not just the Rubi you see on the internet. There’s also the Rubiana that be with her family chilling and eating Eritrean food, graduating from college, living my life. I’m not just a pretty b*tch on the internet talking about her p*ssy. There’s a lot more to me.