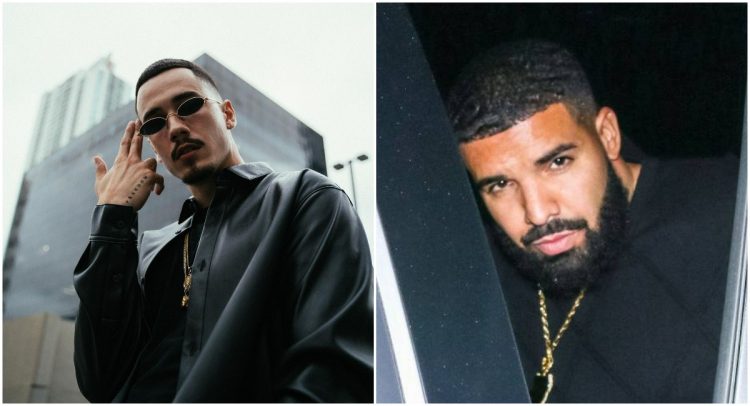 By now, a lot of Drake fans are familiar with up and coming Miami rapper Apollo Lofton who earned a follow back from Drake after he played his music for him outside a Miami restaurant.

Apollo waited for two hours outside the restaurant Drake was visiting and once he came out, instead of asking for a photo or an autograph, he pressed play on his music through his Bluetooth speaker, catching the attention of the Toronto superstar. The song he played? A freestyle over ‘No Friends in the Industry’ from the latest album Certified Lover Boy.

“I just hopped on it, I had to do it,” Lofton can be heard saying to Drake in the video clip as the star acknowledges and goes into his car. “It was too hot,” Lofton says.

Sidebar: HHNM was the first media outlet to cover Apollo Lofton’s music as part of our Saturday Spotlight series back in April.

However, the back story of how Drake ended up following Apollo on Instagram goes deeper and has not been revealed in full yet. How did he know Drake was going to be at that particular restaurant? How did Drake come to know about his IG handle since the video clip doesn’t show that? What did Drake say to him if they did speak?

We talked to Apollo and got a full rundown of the events straight from the horse’s mouth. “I got confirmation through a plug that he was going to be at the restaurant by the beach. When I first heard about it, I had a little bit of fear and was probably overthinking it,” he begins.

“It wasn’t because it’s Drake or like he’s a celebrity, it’s because it’s the biggest artist in the game right now, the artist of the decade. I had a feeling that they’re going to have a lot of security outside and a lot of fans who will be trying to get to him and that I will not be able to get to him. At one point I was just finding excuses not to go but then I looked in the mirror and realized that I have put a lot of work, my own 10,000 hours so this is the right time to take the chance,” he continued.

“I thought to myself that if I go and I am not able to make this happen, at least I have confirmation, a ‘no’, at least I tried. I can live with that but what I can’t live with is a ‘what if’. So I was like ‘ok let’s go, I got to get this, I got to change my dream’. I called my homeboy up, told him to get a speaker and pick me up to go do this. Thankfully I have amazing friends.”

Apollo says it was very quiet outside the restaurant as it seemed like no one knew Drizzy was inside the building. “The eerie thing about it was that it was extremely silent outside the restaurant, hardly any cars and hardly any people, no fans outside and the security was mad cool, never pressed me, never said anything to me. I was like ‘this is meant to be, this is God’s plan for real’. I thought to myself that I am the only one who knows that he is inside and I have a chance to be face to face with the biggest artist in the game. It was meant to be.”

“As fate would have it, he comes out and I already knew what I have to do. I wasn’t going to introduce myself, I wasn’t going to ask for any photos, no time for small talk. I was there to tell him that I am an artist just like you, whatever you are I am too, I am just not a star. So as soon as he walked out, I had the ‘No Friends in the Industry’ freestyle ready to play. And I pressed play on that,” he continues.

“I already had the edge because it was his beat, I decided I am going to do that because it’s his own joint, he has to look. I played the track, he looked and said something I couldn’t hear because the speaker was too loud. Then he was like ‘that’s love’. That’s when the security tells my homeboy ‘cut the camera off’.”

Here’s where the story gets interesting and the real interaction between Apollo and Drake commences. “After he cuts the camera, Drake goes into the back seat of the car and the security comes to me and says ‘what’s your Instagram?’ I start giving them the information and then I see Drake put his window down and tell the security that he will talk to me himself. He calls me, I go to the window, I look straight into his eyes, I am not shaking, I am not nervous, I’m like ‘I’m here to tell him that he is the biggest artist that is known and I am the biggest artist that is not known yet’.”

“He then asked me what’s my Instagram and tells me that he was rocking with the freestyle. Then I actually start to walk off after saying ‘peace and love my brother’. But he calls me back to his car like ‘yo yo, I still don’t have your Instagram, hold up a second’. And that was really a confirmation that he was rocking with me and he actually was going to check out my Instagram page,” Apollo further explains the story.

Surely enough, Drake ended up following him back on the platform which has definitely given a big boost to Apollo’s stars. Now with a whole new confidence, Apollo has dropped a fresh freestyle over the ‘You Only Live Twice’ beat from CLB. The artwork is a screenshot of Drake giving the man a followback on the social media platform. Looks like Apollo is here to stay.