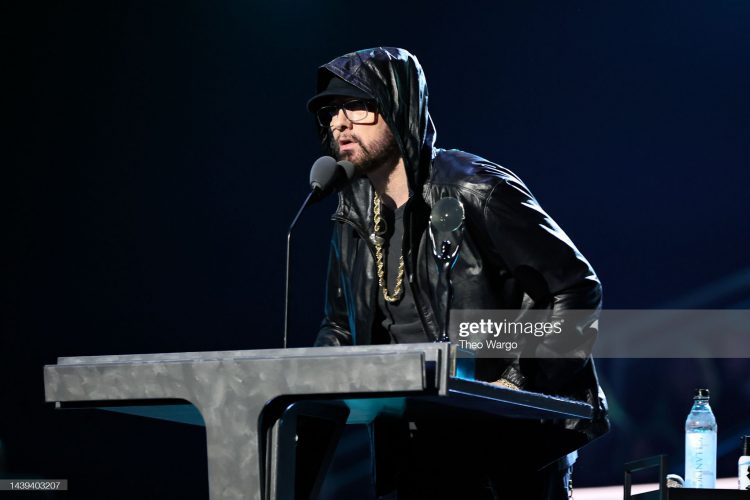 Eminem was inducted into the Rock & Roll Hall of Fame last night at the Microsoft Theater in LA during the induction ceremony.

Eminem earned his Rock Hall spot in his first year of eligibility, the same year that his fourth and biggest studio album The Eminem Show celebrates its 20th anniversary. Dr. Dre did the honors of inducting the superstar rapper who spent most of the time during his speech thanking the musicians who were influential in his journey.

Em had some jokes as well: “I almost died from an overdose in 2007, which kind of sucked because — Hailie, plug your ears — because drugs were f**king delicious.”

Dre said that several people discouraged him against signing Eminem but he knew he was special. “I knew that his gifts were undeniable,” Dre said. “Each of us was what the other one needed — and I was willing to bet my entire career on it.”

Eminem with Steven Tyler!!! What a night. pic.twitter.com/5QOnlqjc7k

Eminem even delivered a medley of hits, going through hits like ‘My Name Is’, ‘Forever’, ‘Not Afraid’ and more, featuring unexpected guests like Steven Tyler and Ed Sheeran.

The Rock & Roll Hall of Fame induction ceremony will air on Nov. 19 on HBO.

I realize what an honor it is right now for me to be up here tonight and what a privilege it is to do the music that I love — the music that basically saved my life. Where’d the man — where did Dre go? The man who saved my life, ladies and gentleman, Dr. mortherfucking Dre. So I’m going to try to make this as quick and painless as possible. I’m fucking stuttering and shit, I mean, Jesus Christ.

So I’m probably not supposed to actually be here tonight because of a couple of reasons. One, I know that I’m a rapper, and this is the Rock and Roll Hall of Fame, and there’s only a few of us right now who have been inducted in already. But there’s only a few of us. Secondly, I almost died from an overdose in 2007, which kind of sucked because — Hailie, plug your ears — because drugs were fucking delicious. And I thought we had a good thing going, man, but I had to go and fuck it all up and take too many. Ok, Hailie, you can…

Ok, so… Hold on, I lost my motherfucking’ spot. Paul, did I say — I said drugs were delicious, right? And finally, I had to really fight my way through, man, to try and breakthrough in this music. And I’m so honored, and I’m so grateful that I’m able to be up here doing hip-hop music, man, because I love it so much. And they say you don’t work a day if you love your job. This part, I’m not crazy about, but okay.

My musical influences, when they say it takes a village to raise a child, well it took a whole genre and culture to raise me. They say success has many fathers, and that’s definitely true for me. So whatever my impact has been on hip-hop music, I never would’ve, or could’ve, done this shit without some of the groundbreaking artists I’m about to mention.

Those were my rock stars, man. And I just want to say those are just a few of the names that I hope will be considered in the future for induction. Because without them, a lot of us wouldn’t be here. I know I wouldn’t. So, that’s all I have to say, man. I know this induction is supposed to be me talking about myself and shit, man, but fuck that. I would not be here without them. I’m a high school dropout, man, with a hip-hop education, and these were my teachers. And it’s their night, just as much as it is mine. So thank you.