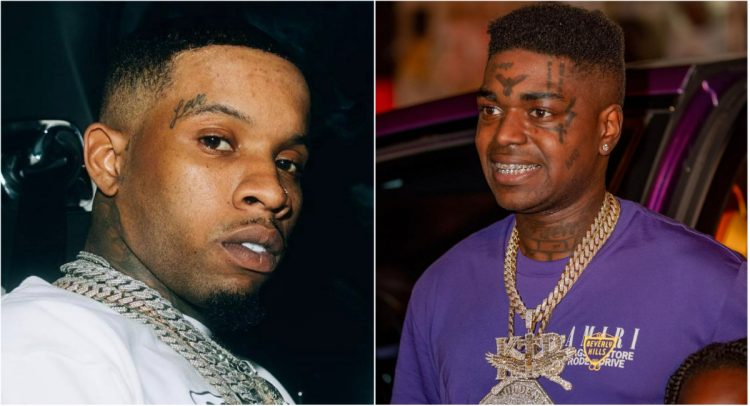 Kodak Black is another artist who doesn’t believe the verdict in the Megan Thee Stallion shooting case against Tory Lanez is fair.

Taking to Instagram Live, the rapper criticized the verdict against Tory Lanez, saying there was a lack of evidence. The jury sided with the state, believing Megan Thee Stallion’s case and finding the Canadian singer-rapper guilty on all three counts, including shooting the Houston rapper.

“Who advised this sh*t before Christmas? And Jay-Z standing behind this, you a f*ck n*gga homie,” Kodak said, dissing Jay-Z and believing the wild rumors that his company Roc Nation has a big role to play in the case. “And Meg, you supposed to be from the streets …. even it was a gunshot on your foot (and not pavement fragments) … I know a b*tch who got shot in the toe, too. I know a female who got shot in the toe. You don’t see her talking about sending n*ggas to jail.” He also called Tory a “good n*gga.”

Kodak Black calls out Jay Z for framing Tory Lanez on Christmas and picking Meg side because she’s a Roc Nation investment… pic.twitter.com/wGcxHCC2w1

“This shit aint right, homie. For real, bro,” Kodak continued. “And Tory Lanez a good nigga, bro…This shit fu**ing with my Christmas Eve. Everybody shit ain’t for me to speak on. But it’s like ni**as aint finna talk about that. Ni**as finna act like this shit ain’t never happen. I don’t know. I wasn’t in the courtroom. But at the same time, if it is some fu**ed up shit going on, ni**as ain’t gonna wanna say nothing because of the politics bullshit. And all of this Jay-Z shit. But I don’t like that shit nan bit.”

Watch the extended clip of Kodak’s IG live session below.