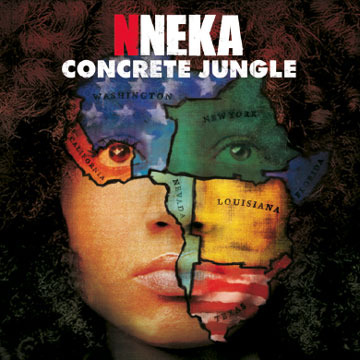 I have featured this talented vocalist/rapper on the blog previously too (here & here) and I truly believe in her potential. Here’s the album cover, track list and press release for her debut album in the US called Concrete Jungle releasing on February 2nd via Decon/Epic. Look out for her!

Nneka’s first US release, Concrete Jungle stands as an offering of love, hope and optimism dedicated to the people of Warri & the Niger Delta of Nigeria. Holding it all together is the emotional focus of her beautiful voice, located in a place somewhere between yearning and rage.

While love, hope and optimism form the bedrock of all Nneka’s recorded work, there’s a steeliness to her new material, the engagement of a highly developed mind on some of the tough realities of modern politics – both personal and international. It takes no little courage and insight to write a song like “Africans”, which tells her people to stop blaming their colonial past for their problems and take responsibility for themselves. To then go back and sing it to packed houses in Nigeria, where the military rule with an iron fist, shows an extraordinary depth and strength of will. But that’s just what she did, making a triumphant return to her home country on tour with MTV-Award-winning Nigerian rapper 2-Face.

Yet, like the woman who wrote it, the song “Africans” is not dry and hectoring – it’s a soft and elegant melody, a piece of music that doesn’t need to shout but instead seduces. Backed by the production of her longtime collaborator DJ Farhot, whose dubby soundworld she has inhabited since those early demo days in Hamburg, Nneka finds the perfect foil for the raw emotion that she brings to a vocal.

Today Nneka’s fans number in the hundreds of thousands across two continents, as she divides her time between homes in Lagos and Hamburg, Germany. Get ready to add a third continent to the mix, as Nneka prepares for her U.S. debut. With everything we’re going through here these days, the timing of Nneka’s optimistic message couldn’t be better!