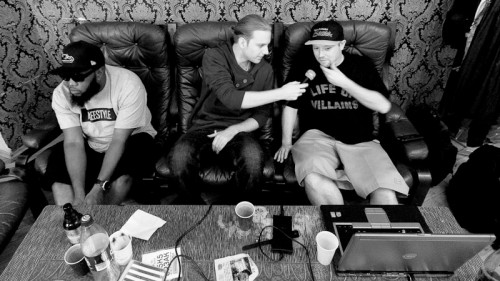 HHNM: That’s a pretty good lineup already. How do you like the present Seattle Hip-Hop scene?

Jake One: Man, I think it’s really big right now. I don’t think it’s ever been like this as far as popularity is concerned. People are coming to Seattle for shows and all that, it’s definitely doing well. Macklemore is doing well. There are some other dudes who are about to break into the scene. I’ve been working with everyone. If I think someone’s good, I just give them the beats. I don’t wait for superstars to give beats to. I make a lot of beats so I wanna be active on that side all the time.

HHNM: So do you always stick to your twitter bio ‘Broke rappers not welcome’ when it comes to upcoming artists? Ha.

Jake One: (Laughs) Well, I get tons of emails every day from random people just wanting beats. I don’t have enough beats for that and most of them aren’t even good enough to be getting beats. But famous rappers have hit me on Twitter and I think it’s good for that. If somebody’s looking for you they can find you there. I’ve managed to get some good work off Twitter. A big rapper will follow you and say ‘I want some’. It’s easier for them since they don’t have to go through all the middle men and know exactly what’s going on which I think is really dope.

HHNM: Definitely. Which artists are you producing for right now? Tells us about your future endeavors.

Jake One: I got some stuff man. Scarface definitely I know has something coming. His album is really dope. I have a couple of beats on there. There are a couple of big ones I did but I don’t wanna jinx it man. Brother Ali is another one I know for sure is coming. Everything else is just waiting till someone pulls the trigger. Oh Yeah, I did some work with Action Bronson, we have something in the works.

HHNM: Most producers have some artists in mind that they wanna collaborate with. What about you? Who would you like to work with?

HHNM: I really think you and Eminem will kill a track together and I remember you saying in an interview that you did something with him.

Jake One: Oh yeah, I actually did a song for his last album but they didn’t use it in the end. I didn’t even get a chance to hear it. I definitely need to get something with him. He’s really one of the best things going in music right now. Hopefully it will happen.

HHNM: Good luck on that sir. Just like last time, it was a lot of fun talking to you. Thanks for your time.

Jake One: No problem man. Thanks for the support.