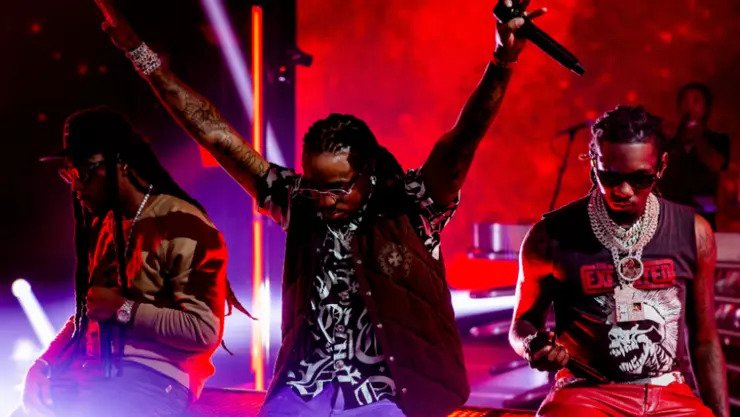 Migos performed at the 2020 iHeartRadio Music Festival on Friday (September 18) where they also debuted a new song, tentatively called ‘Birkin’.

Quavo, Offset and Takeoff kicked off their virtual set with their 2018 single, ‘Motorsport’ and then went on to perform their other popular tracks including ‘Fight Night’, ‘Narcos’, ‘Slippery’, ‘Ric Flair Drop’, ‘T-Shirt’ and more. The also paid tribute to Pop Smoke, performing ‘Shake The Room’ and Quavo’s collab with the late rapper, ‘Aim For The Moon’.

Before honoring Black Panther star Chadwick Boseman and all the lives lost to police brutality, the Atlanta trio also offered a new song for the audience which is inspired by the popular bag ‘Birkin’ from luxury brand, Hermès. Tay Keith confirmed on Twitter that he produced the unreleased record along with Carnage.

Prod by me and carnage🔥 https://t.co/mB06gTxr9s

Unfortunately, fans online are not feeling it, calling it repetitive and without much substance. Check out some of the reactions below. Migos dropped the music video for their NBA Youngboy featured track ‘Need It’ last month. They had also revealed prior to that their upcoming album won’t be called CULTURE 3 anymore.

god this is so ass https://t.co/CDcyPEvdCU