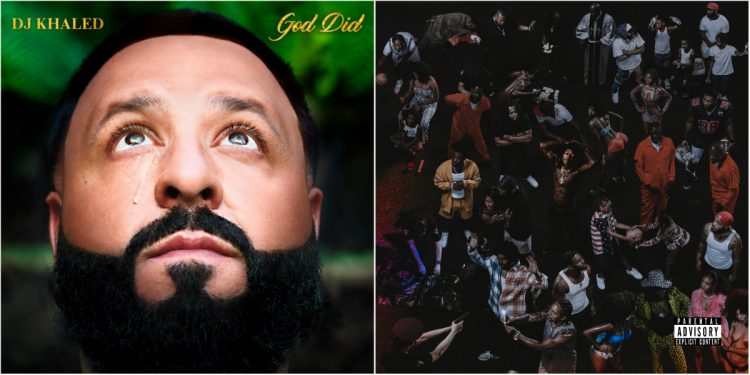 UPDATE 2 (Sept. 2): The first week tally is here and DJ Khaled has come out on top with 107k copies moved in the first week, according to HDD. Bad Bunny managed 105k. Keep in mind that the official Billboard numbers may be different which we will know on Sunday.

UPDATE (Aug. 31): HDD reports that due to an increase in streams for Bad Bunny and a decrease for Khaled, the battle is now too close to call it at the moment. Only a few thousand units are separating the two and the final story will be clear at end of the tracking week.

This past Friday saw two major label albums worth noting: DJ Khaled’s God Did and JID’s The Forever Story.

Khaled always does big with his albums: from star studded features to the music videos and marketing. This time, he is assisted by Eminem, Dr. Dre, Kanye West, Lil Baby, Drake, 21 Savage, SZA, Future and more. Khaled along with Streetrunner, TM88 and Tay Keith have done bulk of the production.

So how good is it moving in the first week? God Did is projected to shift 105-115k units in the first week, reports HDD. This should be enough to beat Bad Bunny to the number 1 spot next week on the Billboard 200 but we shall see what happens.

JID, on the other hand, is looking at 27-30k copies in the first week. The album features the likes of Lil Wayne, Ari Lennox, Lil Durk, Kenny Mason and more.