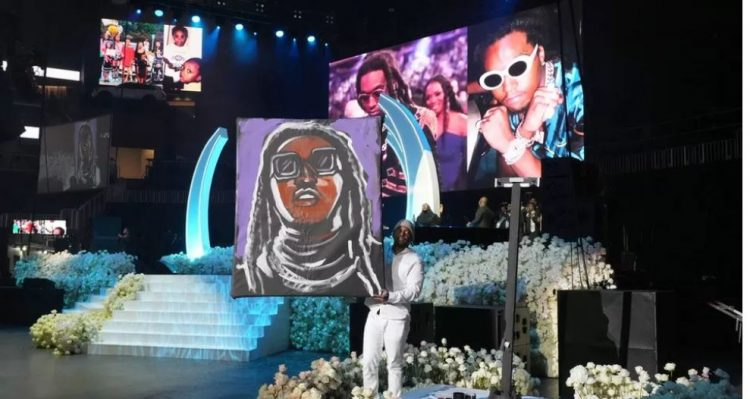 Thousands of fans paid their final respects to the Takeoff at a star-studded memorial service in Atlanta, Georgia on Friday (Nov. 11th).

Drake, Justin Bieber, Cardi B, City Girls and Chloe Bailey were some of the stars spotted in attendance at Friday’s “celebration of life” ceremony. Free tickets to the memorial service were available to Georgia residents, but the State Farm Arena announced on Friday that the event had reached capacity.

The Migos rapper was shot and killed Nov. 1 during a private party at a bowling alley in downtown Houston with Quavo. According to the coroner’s report, he was shot multiple times in head and torso.

No media was allowed inside the venue to cover the event, and phones and recording devices of fans were banned. See the full event info below.

Officiant delivering the Eulogy: As faithful members of New Mercies for the past eighteen years, the family requested that Pastor Jesse Curney III (Senior Pastor of New Mercies Christian Church) deliver the Eulogy during the service

Pallbearers were family and friends: *no artists

The legacy of Takeoff

Kirsnick “Takeoff” Khari Ball, 28, of Atlanta  left us on November 1, 2022, after an untimely incident took him decades before his time. Kirsnick (or Takeoff, as fans, friends and family alike all called him) was a most gentle soul, with a peace about him alongside a wise demeanor far beyond his years. Endearing and impressive both on stage and in private life, Takeoff  commanded respect wherever his path took him from musicians, family,  industry and peers alike.

What mattered most to Takeoff was his family and he was known to spread real love to all the lives of everyone who knew him. The beloved son of Titania “Treet”  Davenport and Kenneth Ball, Takeoff (or Kirsnick) was the most loving grandson of Edna Marshall and most devoted nephew and artistic collaborator of Quavious “Quavo” Marshall. He is survived by siblings Ezekiel Davenport and Heaven Davenport, Aunt Kashara Reed and numerous cousins.

He was an amazing talent who led an extraordinary life; from being a kid growing up in Gwinnett County making music in his Grandma’s basement to performing worldwide on arena tours with hundreds of thousands of screaming fans paying witness to his lyrical prowess in any given year.  He was a critical darling with press often touting him as a great lyricist and rapper of our time and a fan favorite. His deep bond with his Uncle Quavious Marshall known to the world as simply “Quavo ” carried them from childhood family members to profound musical partners in the super group Migos alongside childhood friend Kiari “Offset” Cephus.  Migos changed music as we know it and shifted the style of rap for almost a decade after their first viral hit and their unique uses of adlibs and word play.  Takeoff’s contribution to the culture through Migos and beyond with his own solo album and recent critically heralded album with Quavo is a part of music history with chart topping hits, rave reviews, television moments, Billboard chart #1s, and billions of streams of music. Takeoff and crew went from internet viral up & comers in the basement to chart topping artists donning the cover of Rolling Stone and Grammy nominations.

Born in Atlanta, Georgia, Takeoff attended Berkmar High School in Gwinnett County and had been vocal that when they were all playing sports (Quavo and Offset) he was training to be a rapper. One sweet school days anecdote before the rap acclaim was winning the 4th grade spelling bee! All he ever wanted to be was a rapper- it was his singular goal and he achieved it in a monumental way. He always loved music, rapping, all things space and watching films and TV series.  On a human level it was simple: When Takeoff smiled you just thought everything was going to be OK. He was a deep thinker and it would show up in conversations and veiled in rap lyrics.

Takeoff’s biggest passion in life was music, and all he ever wanted to do was leave a mark and have a legacy that lasted for decades as he once told Complex magazine during an interview for a cover story. His Mom Treet used to play him all the Hip Hop she loved and from the time he could crawl he would head to the speakers and pull himself up to dance and move to the bass. From a young child he was always intent on being a rapper with his favorites being Lil Wayne and all the Cash Money crew.  His curiosity and love of rappers was immense and he’d keep up on every artist coming out from the underground to big stars, always grinding through Youtube looking at everyone’s videos. If you were an artist who had a video out then Takeoff saw it!  He was a true and deep fan of Hip Hop and remained a student of it til his last day even when considered a master himself by so many.

In the last many months of his life, Takeoff turned to writing and recording with Quavo to create their joint album “Only Built For Infinity Links” which came out to much critical acclaim and kicked off by a performance on The Tonight Show with Jimmy Fallon. The campaign was just beginning and plans to tour and spread the music globally were in play.

There are no words or sentiments conveyed that could aptly encompass the love so many had for him and the impact he made on this world. Takeoff would want the world to see the light in what he created and keep lifting each other up and supporting the creations people put into the world.  He’s now up with there with the stars he loved so much and remains in all our ethers on a daily basis living on through his music and the love he brought to so many.

In lieu of flowers, please consider a donation to The Rocket Foundation: https://www.rocket-foundation.org/