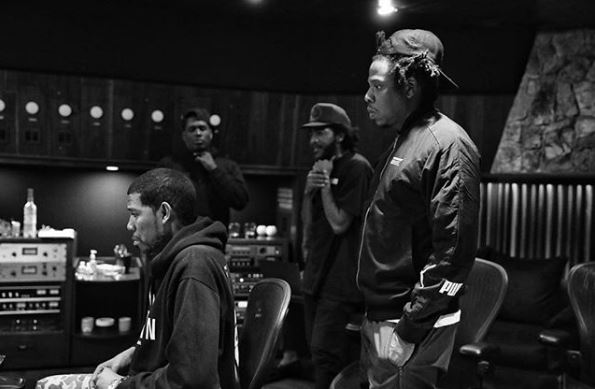 UPDATE: It’s official, Jay Electronica’s debut album titled A Written Testimony is on the way. A short while ago, TIDAL posted the information that the rapper will hold listening sessions for his album in New York, Los Angeles, and New Orleans on March 12.

Check out the tweet below. Fans can RSVP here.

Last month, Jay Electronica took to Twitter to tell the world that his long awaited album was finally done and would be out in 40 days. It wasn’t the first time that he’d made that type of claim, and many speculated that it would pass and wouldn’t be the last.

What was interesting about it this time around was that JAY-Z went out of his way to like the tweets and affiliates like Young Guru and Just Blaze took to social media, implying that they knew something that we didn’t about the project. You might remember that a year ago, Jay Elect took to Instagram to say that him and Hov doing an album was “likely“.

Tonight, Guru took to Instagram to post a picture of him in the studio with JAY-Z and Jay Elect, with the caption “If I don’t have a haircut…… you already know!!” Along with the below tweet from It’s The Real, this seems to fuel the rumours of the project (which is supposedly 8 days away) being a collab LP.

It’s been 3406 days since Nov. 12, 2010, when we were at The Box in NYC and Jay Electronica signed to Roc Nation. I guess we can wait a few more til the album finally drops. All we know is: it’s real & it’s coming. Thanks to Jay & Jay for getting in the studio & making it happen. pic.twitter.com/5stkh3qNIy

Whatever happens, it looks like this could be it and we’re excited. Check out the post below.

If I don’t have a haircut…… you already know!! 📸by @kodaklens