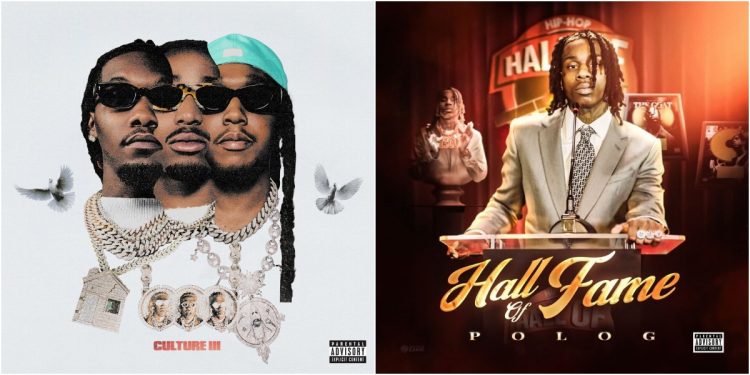 UPDATE: This week turned out to be a lot closer than the original numbers projected and it became a battle of sorts. But the final numbers are in and Polo G takes the crown with 145,708 copies sold first week and 16,094 in pure sales.

This past New Music Friday was a pretty busy one with French Montana and Megan Thee Stallion returning with new ingles amongst other artists releasing new singles.

The biggest projects that dropped were of course Polo G’s new album Hall Of Fame and Migos’ CULTURE 3. Today we have some idea of what numbers they could do first week. Polo’s album, which features Nicki Minaj, Pop Smoke, DaBaby, Roddy Ricch and more, is projected to move 165-175k copies in the first week with about 4-7k out of those coming from pure sales. This will give the Chicago rapper his first number 1 on the chart.

Polo G was arrested on Saturday morning on multiple charges in Miami.

Migos’ third in the CULTURE trilogy is currently on pace to move 125-135k copies in the first week with about 5-8k coming from pure sales. They are expected to debut at #2 behind Polo G at the moment. Both CULTURE 1 and 2 debuted at the number 1 spot in 2017 and 2018, respectively.

Maroon 5’s new album JORDI, which features posthumous features from Nipsey Hussle and Juice WRLD, is on track to move 29-33k copies in the first 7 days.