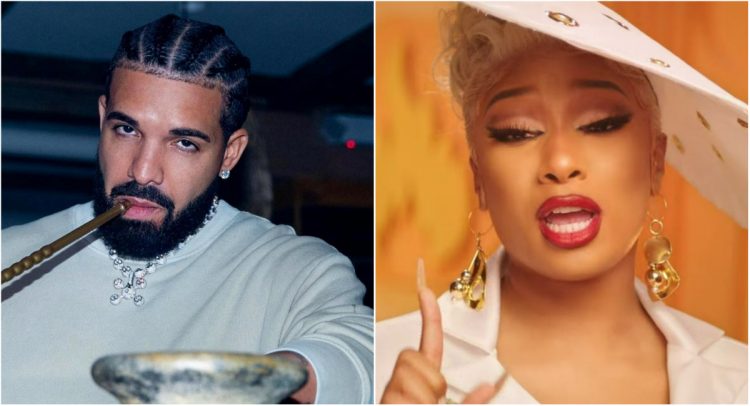 Megan Thee Stallion has reacted to Drake’s apparent shots at her on the song ‘Circo Loco’.

On the track, which is one of the standouts on his latest album with 21 Savage, Her Loss, Drizzy raps certain lines which sound like they are aimed at Megan. “This bitch lie ’bout getting shots, but she still a stallion/She don’t even get the joke, but she still smiling,” the Toronto superstar raps.

Although Megan is not mentioned by name, “shots” could refer to butt injections and of course, the Tory Lanez shooting. Later in the track, he again says some lines which may be a reference to Megan: “Shorty say she graduated, she ain’t learn enough/Play your album, track onе, ‘kay, I heard enough.” As we all know, Megan graduated from Texas Southern University in 2021.

Megan seems to have caught wind of the situation, first firing off the tweet, “I know I’m very popular but y’all gotta stop attaching weak ass conspiracy theories in bars to my name lol Ni**as nor hoes EVER address me or @ me WITH a fact or receipts. I AM CLOUT BITCH keep sucking my pu**y.”

When a fan pointed that Drizzy did say “stallion” and hence took her name, Megan replied, “A stallion is slang for a TALL THICK WOMAN.”

I know I’m very popular but y’all gotta stop attaching weak ass conspiracy theories in bars to my name lol Niggas nor hoes EVER address me or @ me WITH a fact or receipts. I AM CLOUT BITCH keep sucking my pussy

A stallion is slang for a TALL THICK WOMAN https://t.co/HQr2mT6vR3

Later on, Megan continued, saying that people are joking about the serious issue that Tory allegedly shot her and are looking for clout out of the situation. She also says that when the truth comes out, we should all remember who all stood behind Tory ad against her.

Stop using my shooting for clout bitch ass Niggas! Since when tf is it cool to joke abt women getting shot ! You niggas especially RAP NIGGAS ARE LAME! Ready to boycott bout shoes and clothes but dog pile on a black woman when she say one of y’all homeboys abused her

Tory Lanez was recently placed under house arrest in the Megan shooting case over the alleged altercation with August Alsina recently.