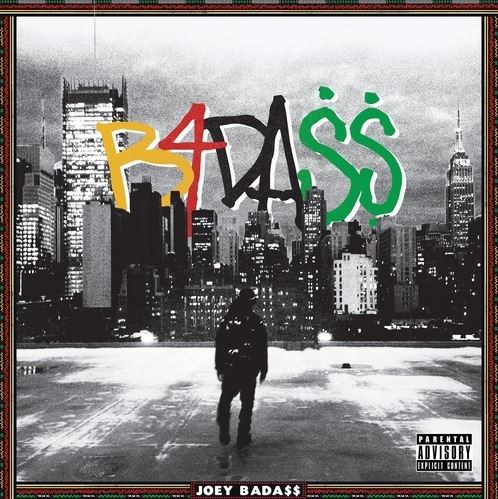 The first sound you hear when listening to Joey Bada$$’s highly anticipated debut album B4.Da.$$ is an electrified crowd chanting his name. This introduction is a fitting one when we look at the early career trajectory of the Pro Era leader, who became a New York hip-hop prodigy of sorts when he burst onto the scene in 2012 with his acclaimed mixtape 1999. Disciples of the classic 90s golden-era style proclaimed Joey Bada$$ as their modern-day savior, a young Brooklyn-bred emcee who could flow over J Dilla/Lord Finesse/MF Doom beats with supreme ‘third-eye open’ lyrical precision. And while Joey’s most recent mixtape/free album Summer Knights fell short of the standard he set for himself, B4.Da.$$ proves to be his most polished and refined body of work to date, with Bada$$ simultaneously sticking to his rugged roots yet also displaying prominent indications of branching out beyond the streets of Bed Stuy.

Before one examines the strong signs of progression on B4.Da.$$, it should be made clear that Joey Bada$$ remains uncompromised in regards to his natural affinity for boom-bap hip-hop. References to Biggie, Jay Z, Big L, and Big Pun are heard loud and clear throughout the project…hell he even shares that Ol Dirty Bastard was his idol as a youth (which makes complete sense when hearing some of Joey’s cadences). However, where B4.Da.$$ truly stands out is in the moments of artful experimentation such as the reggae-inspired “Hazeus View”, sonically up-tempo “Escape 120” (ft. Raury), and the smoothly melodic/deeply reflective “On & On” (ft. Maverick Sabre and Dyemond Lewis). The hooded-up/Timberland-laced fans out there should be thrilled hearing Joey use his menacing flow on tracks like “Christ Conscious”, but Bada$$-and his well-selected team of producers- deserves the most credit for skillfully switching things up by presenting a strong sense of sonic balance on the project.

In terms of what Joey Bada$$ offers from a lyrical perspective, the purposeful content on B4.Da.$$ is wise beyond the years of its creator. Joey displays his artistic maturation on songs such as “Piece Of Mind”, which focuses on an incarcerated friend as Joey performs the song for him over a prison phone. The transition from this record to the cleverly titled single “Big Dusty”-which is essentially a middle finger to his naysayers who write him off for his ‘outdated’ style- is masterfully executed and a testament to the meticulous approach Joey implemented when crafting this album. His strong support system behind the boards gives Bada$$ the proper platform to achieve his lyrical vision with Chuck Strangers, Kirk Knight, Freddie Joachim, and Statik Selektah providing more than half of the production. The cohesiveness pays dividends as Joey finds himself in a comfort level on tracks such as the soulful “Curry Chicken”, which is perhaps the most personal song on the project with Bada$$ talking about his relationship with his mother.

Bada$$ and his Pro Era crew have gone through multiple experiences of tragedy these past few years with the loss of Capital STEEZ as well as Joey’s cousin/manager. B4.Da.$$ displays the eventful journey of a Brooklyn emcee who has grown up quickly and is not afraid to share his life experiences. The fans who discovered Joey Bada$$ a few years back will be proud of his growth on the album as the Pro Era emcee blends the best of the old school (“Paper Trail$” may be one of DJ Premier’s better beats in recent years) while also ambitiously delivering more modernized offerings. A shining example of the latter would be the vibrant “Teach Me”, the last bonus track on the album which features Joey spitting in a double-time flow alongside the beautiful, yet haunting vocals of singer-songwriter Kiesza. By the time B4.Da.$$ officially wraps up, it is evident that Joey Bada$$ not only has a steadfast allegiance to the nostalgic style which gained him national attention on 1999, but also the artistic versatility which will enable him to fulfill his greater potential and take his career to new heights.