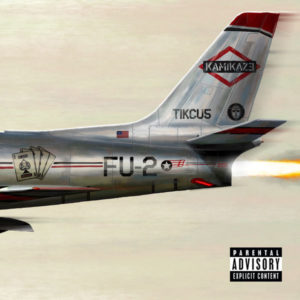 It’s easy to judge a misstep, but how an artist responds to one is ultimately more important. 2017 was self admittedly a rough year for Eminem. Critics almost universally panned his much anticipated Revival album, labelmates criticized his intentions, and his status as a commercial juggernaut started to waver a little. It was the first time you could really say an Eminem album came and went from the public spotlight. So how does any artist, especially one that is an undisputed great, respond to arguably the biggest flop of his career? He surprise drops an album with little to no fanfare and just lets the music speak for itself. The rapper’s 10th album, simply titled Kamikaze, lives up to its name. Eminem uses the albums runtime to reflect and go head first at any and everyone who’s had something to say about him in the past year. In the time since its release, sales projections have risen by the day past original expectations, and it’s spawned a diss track from one of the album’s targets, Machine Gun Kelly. This doesn’t look to be the disappointment of Revival, but does it live up to the work that once garnered him the title of “Rap God”?

The short answer to the aforementioned question is not a resounding “Yes” or “No”, but falls somewhere closer to “Sort Of”. The pandering towards a mainstream audience is almost completely gone as Eminem delegates most of his time here to just rapping. He holds no punches as everyone is fair game for his rap jabs. The guest list remains relatively small this time around consisting of only Royce Da 5’9, Jessie Reyez and Joyner Lucas. That speaks to the project’s larger onus on remaining focused and cohesive as opposed to Revival’s 19 track, 78 minute runtime. ‘Kamikaze’ falls somewhere between defensive and combative. He wants you to know that even if he dropped a dud, you should still respect his status and not forget who he is.

‘The Ringer’ appropriately delivers this message. It serves as a half recap, half warning introduction. It showcases flows that we haven’t heard from Shady in a while as he discredits mumble rappers and speaks briefly on politics once again. The opener finds a genuinely hungry Eminem again, and the very thought of that should be scary to other rappers. The hunger remains for a good portion of the album. One example is the Mike Will produced ‘Greatest’. Em uses a double time flow that not many of his contemporaries are capable of. He interpolates both Playboi Carti and Kendrick Lamar on the song and attempts to remind everyone that it’s hard to keep up with his technical ability. His assumption on that front is spot on.

Other impressive displays of technical ability are the Joyner Lucas assisted ‘Lucky You’ and the Royce 5’9″ featuring ‘Not Alike’. The former features two very similar rappers stylistically rapping from different perspectives in the game. It’s refreshing to hear someone like Lucas that has drawn so much influence from Eminem go toe to toe with him. On the latter, Em and labelmate Royce trade bars on a track that serves as an almost mockery of today’s rap. Over a Tay Keith produced beat that sounds nearly identical to his work on Blocboy JB and Drake’s ‘Look Alive’ from earlier this year, the two write off the current rap phase that leads the pack. It’s yet another example of Eminem sounding disappointed in the direction rap has gone. This album is almost a confessional for someone that feels like his bond with hip-hop is starting to fade.

While it can’t be reiterated enough how big of a step ‘Kamikaze’ is in the right direction, there are still some minor blunders that hold back it back from being great. Those who are fed up with a rapper in his mid 40’s still calling people gay slurs and talking about sex like a teenager won’t find much solace here. While the album itself is more focused and definitely has some of the fat that was included in past albums trimmed, there is still more than enough cringe worthy moments for critics who just wish Eminem would grow up. While other rappers who are in his age bracket like Jay-Z or Phonte are entering their 40s and 50s with new realizations and a more mature sound, that is not the route Em has taken. His decision to still let homophobic terms run rampant through his music has upset some especially after he calls Tyler, the Creator out by name on ‘Fall’. The song even prompted featured artist and Bon Iver frontman Justin Vernon to tweet out that he doesn’t support the song and wasn’t there for the recording of Em’s verses.

Eminem has been no stranger to controversy throughout his career, so all of these moments should come as no surprise to those that have listened over the years. What should come as a surprise is how repetitive Shady starts to feel as this album comes to a close. There are countless moments where you might be listening and find yourself wondering how many times he’s going to talk about writing his own raps, or name drop a soundcloud rapper, or just respond to anyone who’s had anything to say about him in the past year. The album is like an athlete that relies too heavily on his athleticism to the point where their game never actually progresses in any way. They may wow you with a dunk or two every game, but it only ends up distracting you from the fact that when you take a deeper look, there isn’t much else there. That’s how much of Kamikaze can feel. Despite all the showmanship and flows that make your head spin, it still leaves you feeling somewhat empty at times. What makes it more disappointing is that Eminem has never had any issue making personal songs, but he turns mostly outward here. He projects his emotions onto others instead of giving us insight into his current state. It’s no secret that Em is one of the more private celebrities, but listeners walk away from Kamikaze mainly gathering that he is angry about how his 2017 went.

Eminem is immortalized. He could release duds for the remainder of his career and still be looked at as one of the best rappers to ever pick up a mic. With Kamikaze, he finds his bearings and starts to steer the ship back in the right direction. The hunger is there and he hasn’t lost a step rapping, but he can’t quite seem to figure out who he wants to be. At 45, Eminem has embraced the youth to an extent, but also can’t seem to accept that it isn’t 2002 anymore. He’s cosigned the Kendricks, the Coles and so many others, but the new wave of rap taking over the internet seems to have him more threatened than he ever was by the lyricists of his time and the mid to late 2000s. It’s not just the changing of the guard, but the lack of respect that has Em almost feeling the need to protect what he feels is sacred. We get hardly any insight into the man himself and that is where Kamikaze’s biggest flaw lies. Rare insights like the D12 farewell ‘Stepping Stone’ show that he can still reminisce and tell us about a personal situation, but he seems more torn between trying to recapture his crazy Slim Shady days and not disappointing the masses. Despite this crossroads, it sounds like Eminem is listening to criticism and that’s more than you can say for most rappers. Kamikaze is good, but it’s frustrating because you can tell that he still may have the potential for something great. Let’s hope he continues to bounce back.