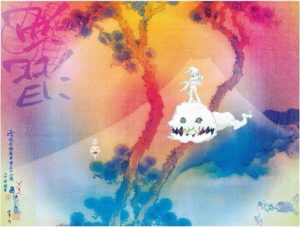 It’s 2008. Lil Wayne is at the top of the rap game with Tha Carter III. T-Pain pretty much lives on the charts with every track he graces his presence. T.I. is having the biggest year of his career. Guys like Rick Ross, Young Jeezy and The Game are cementing themselves as stars and the snap movement is starting its descent from the top of the charts. Then somewhere, off in their own world, are a young Kid from Cleveland and a superstar that has just been through one of the worst years of his life creating music that sounds nothing like what the it-rappers of today are making. This is where the beautiful mess of a friendship between KiD CuDi and Kanye West begins. The two click instantly as the larger than life icon is assisted by the lonely stoner on his album of heartbreak and loss and then signs him to his G.O.O.D. Music imprint shortly after. Everything is aligned for these two. Kanye will continue being one of music’s biggest stars and CuDi will be his understudy, a protégé and superstar in the making. It’s a match made in music heaven.

Now it’s 2018 and things didn’t quite go as planned. Our heroes from 2008 have had a laundry list of issues: Public feuds, mental breakdowns, rehab stints, hospital visits, and two artists whose careers started to take very different paths. KiD CuDi left the label in 2013 and has experimented musically with very mixed results as Kanye decided to split his time between fashion, family and music that’s felt like more of an afterthought when compared to his older, more focused material. Cudi’s trajectory never quite reached its projected path and Kanye isn’t the commercial behemoth musically that he once was and seemed as if he’d always be. The past ten years have ranged from brilliant to extremely bumpy for the duo, but both artists stand here today seemingly ready to put the past behind them. They’ve made amends and decided to lock in for a proper LP, under the moniker of KIDS SEE GHOSTS. It’s a project that seemed destined to happen ever since the first time we heard them on a song together a decade ago. It’s an album that fans would have once given a kidney for, but now almost feels ten years too late. KIDS SEE GHOSTS arrives at an interesting point in both artists careers and one can only hope that they recapture the magic in a bottle they once held.

The LP instantly reveals how these two artists seem to reign in each other’s talents and keep their worst tendencies to a minimum. KIDS SEE GHOSTS is a refreshing stray from the norm in today’s rap landscape as it takes risks that nearly all have some sort of pay off. If last week’s solo effort ye felt scatterbrained and like a reactionary rush job, then GHOSTS is a meticulously thought out project with cohesive ideas. KiD CuDi will remind many listeners why his brand of emo sing rapping rose to the forefront in the first place. Take the bold opener ‘Feel The Love’ which features Pusha T doing what he does best, Cudi delivering incredibly strong vocals and Kanye doing his best Big Shaq impression in the track’s latter half with a flurry of impersonated gun shots. The whole thing feels like a firework that’s about to go off; more grand finale than opening act. Once it explodes, it returns to its more subdued and eerie tone. It’s a opening statement that encourages listeners to expect the unexpected.

‘Feel The Love’ starts a trend of unique and exciting production that remains a highlight throughout the album’s entire seven song tracklist. On ‘4th Dimension’ Kanye literally samples a 1930s Christmas song, giving listeners flashbacks to some of his genius sample work of the past. ‘Dimension’ also features the rappers trading verses to terrific effect. Kanye sounds like his verse was taken out of a vault from the Graduation era with its wittiness and flow. CuDi channels similar energy with a cadence that has been missing since his Man on the Moon days. These qualities remain consistent for most of KIDS as Kanye’s rapping is focused and Cudi’s singing sharp. The duo bring the best out of each other and help one another tackle demons along the way.

Demons are a recurrent theme across GHOSTS, and both rappers have their own process for overcoming them. Kanye seems to be the madness that balances out Cudi’s zen. Where Kid Cudi is a new man, welcoming a fresh start, Kanye is embracing his demons and turning them on their head. Album centerpiece and clear standout ‘Reborn’ illustrates this to a tee. It’s not only the album’s greatest moment, but probably one of the best songs of the year thus far. Kanye remains vague on giving fans a true explanation for last month’s events, but offers some insight into his current mindset when he says “I want all the rain, I want all the pain/I want all the smoke, I want all the blame.” It’s a verse of self awareness and reflection that has been sorely lacking from Kanye as of late. Cudi balances the quick verse with an infectious refrain about “moving forward” and being “reborn”. It’s a therapy session on wax. Other welcome surprises include Mos Def showing up on the title track, and an introspective verse about gun violence from Kanye on album closer ‘CuDi Montage’. It’s been awhile since we’ve heard Kanye rap from someone else’s shoes and sound so good doing so.

Needs more back and forth. Short.

There is only a little to critique with KIDS SEE GHOSTS. It is a clear concept with a clear goal that nails the execution. It follows the same brisk format of the two G.O.O.D. Music albums that preceded it in as many weeks, but still manages to feel substantial. With Kanye having such an influential role in the production of these albums, he is having to make time to rap as well and the verses we get here are some of his best in years, but it feels like there should be more of them. No song on KIDS has more than one Kanye verse and the duo never really trade bars back and forth at any point either, which is disappointing. This feels like something that would have added to an already good album, but the quality over quantity approach is still a welcome one. As music listeners we become greedy when an album is this consistent and it makes us want more. With a runtime just over 20 minutes, the album comes to a close just as it sells you on its ideas, but maybe that was the goal.

Ten years removed and fans finally received a proper project from KiD CuDi and Kanye West. Circumstances have changed, but it turns out that when placed together, some of that magic does indeed still exist. It’s not what the album would have sounded like in 2008, but instead something more refined and mature. It’s experimental, weird, joyous, uplifting and more than anything it’s two artists that sound like they’re having fun again. Many of the tracks’ instrumentals literally have a marching drum quality that seems to represent the two artists desire to push through their demons and enjoy life. KIDS SEE GHOSTS is about getting back to the essence of creation and understanding that the ghosts we all live with don’t have to hold us back. Despite their ups and downs, KIDS SEE GHOSTS proves that when Kanye and CuDi get together, they might still be the kids they used to be, for better or worse.