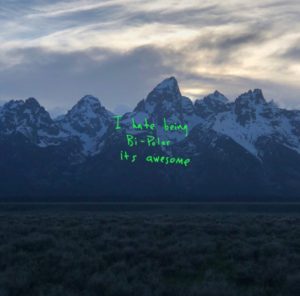 Kanye bluntly admits that “it’s been a shaky ass year” for him a little over halfway through his 8th and newest LP, simply titled Ye. While straightforward, even that may be understating it a bit. Kanye has always been polarizing, divisive, erratic, and every other synonym for someone who’s only predictable trait is being unpredictable. He addresses this head on with an album cover that ironically reads “I hate being Bi-polar, it’s awesome”. The biggest question outside of whether or not this album would actually release on time was what exactly these seven new Kanye tracks would and wouldn’t say. Some wondered if he would double down on his support of Trump and his slavery comments or if he would offer an uncharacteristic apology. After last week’s impressive Pusha T album, Kanye has a lot to live up to, but also a lot to cover. Everyone cancelled Kanye and then rushed out to a campfire in Wyoming to listen to his new album with a bunch of other journalists and tastemakers. While for many it’s their job to cover these events, it’s important not to get caught up in the spectacle as many say Kanye has. All of his transgressions aside, Kanye has delivered great albums throughout most of his career. With public perception at an all time low, impressing people with an album they are eager to hate because of its creator will be a tough task.

The Features. The Production. Some Introspection.

After repeated listens of Ye, it becomes clear that Kanye has not lost a step on the production front. In fact, it shines as one of the project’s main highlights. He is still adept at building a soundscape that best fits the person rapping or singing alongside him. None of the features are actually credited in the songs titles, but there are more than a handful of notable ones. It doesn’t take multiple listens to realize that these features are the best moments of Ye. Take highlight ‘Ghost Town’, which features PARTYNEXTDOOR, KiD CuDi and GOOD Music signee 070 Shake. The song is the most melodic on the entire album and the only one that doesn’t include a rapped verse by West. Everyone sounds right at home on the production and the song grows wings and soars on the anthemic outro by 070 Shake. She proclaims that “We’re still the kids we used to be”, possibly in reference to the whole Old Kanye/New Kanye debate. The track’s culmination is not only an incredible introductory moment for 070 Shake, but also a soulful proclamation that begs repeated listens.

As her vocals end ‘Ghost Town’, they begin the succeeding and closing track ‘Violent Crimes’. The track serves as an ode to Kanye’s daughter and about the worries a father has about watching them grow up and having to let them go. Despite a few lyrics that could be interpreted as somewhat problematic for Kanye to say during an ode to his daughter, it still remains mostly sincere and heartfelt. Kanye even has a couple of moments where he sounds more mature when speaking on women and how having a daughter changed him. For example, he now sees “women as something to nurture, not something to conquer”, and although this shouldn’t be a revelation for a 40 year old, it’s still a rare proclamation for Kanye. Ty Dolla $ign and 070 Shake close the track by harmonizing the hook once again and ending the album on a high note.

Other small insights and rationalizations are sprinkled throughout the album. While there is no mention of Trump, he does speak on his slavery comments, the #MeToo movement and mental health. His views on these topics is far from clear after hearing his raps on them, but he does attempt to clarify some of the things he’s said in the past. On the apology to his wife and dedication to women, ‘Wouldn’t Leave’, he references two of his most controversial moments. He spits “They said build your own, I said how Sway/I said Slavery a choice they said how ‘Ye/Just imagine if they caught me on a wild day”. He never really apologizes or rescinds the comments, and instead he chalks it up to him acting out in the moment. By not doubling back on those views, it in turn is him doubling down on the comments unfortunately. It’s also troubling to see that Kanye said his wife called worried about losing money after Kanye’s TMZ visit and not about what he actually said. The rest of the song is strong and is the beginning of a back half that is rooted in soulful beats and R&B features in comparison to a more aggressive and braggadocious front half. The duality of the album’s two halves is mirrored by the cover and this feels intentional. The first half is a Kanye that still feels the anger and angst of the ‘Yeezus’ era, where the latter is the new “Love Everyone” Kanye. In retrospect, ‘Bipolar’ might have been a more fitting title for this album.

The Lyrics. Too short. Sounds rushed. Doesn’t sound like a solo LP.

For everything to like on this album there is also something to hate. Ye is an album that is hard to call bad, but it’s nearly impossible to not feel disappointed. Fans have been hearing rumors of these epic recording sessions in Wyoming for nearly a year and what ends up being presented here is an album that was created in the last three weeks or so. Whether the content on the old album that Kanye was going to release was too controversial and reflected the statements that he was making leading up to the album is a mystery, but the music we’re left with could have used some more fine tuning.

The seven track formula that worked so well for labelmate Pusha-T is not as suited for Kanye West’s style. While he’s made focused, concise works in the past, ‘Ye’ is neither focused or concise here. The album feels scattershot and unsubstantial. Kanye’s vocals receive the bulk of the airtime, but it still ends up playing more like a sequel to the Cruel Summer compilation album than a true solo effort. At this point, Kanye seems interested in being more of a conductor or curator than a rapper. He’s still great at pulling out the best in those around him, but he needs work on not letting his lyrics and rapping fall to the wayside. This is where it becomes apparent that the album was rushed.

It may be that Kanye is more focused on the larger task of actually releasing 5 albums in one month to actually care about his own. It’s not that Ye doesn’t still have good music on it, it’s that it doesn’t hold a candle to what we’re used to from him. Even on auto pilot, Kanye can still create music at a higher level than most of his contemporaries, but when you’ve become accustomed to someone who’s always surprising and never travels the same path twice, it’s hard to hear something so boring. If you use his campfire listening party as reference, there are hardly any moments on Ye that would make you put your S’mores down and stand up in excitement, and the times it comes close have nothing to do with Kanye himself. The highlights of the album come when we hear a voice other than West’s.

It’s always been difficult to separate Kanye from his music, but on Ye it’s nearly impossible. Maybe Ye sounds good, maybe it’s entirely self indulgent, maybe it’s better than we thought, or maybe it sucks. Truth is I’m not sure how I feel about this album even 30 or so listens later. Perhaps one day it will all make sense, but today is not that day. I walk away only let down; by the music, by the man, and by his future. I think Kanye’s music has a special place in every twenty or thirty somethings’ heart, even if they don’t want to admit it after the occurrences of the past two months. His music always felt like an event. It was something you associated with a time in your life. Now the event is Kanye and his antics and not the music. The main thing we associate each album cycle with is the biggest headline Kanye caused. The elation of Graduation, the pain of 808s and the grandiose of Fantasy are nowhere to be found here. Some of that underdog kid, chopping up soul beats, that just wanted to make it still lives inside of Kanye, but with each album it fades a little more. He was on to something when he said “we miss the old Kanye”, but when you think about it, maybe this is who he was all along.

Skip: ‘I Thought About Killing You’