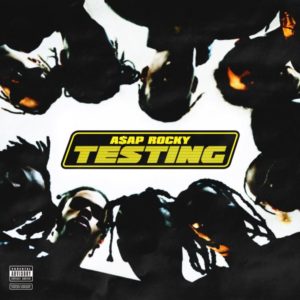 Testing is the perfect word to encapsulate the lead up and release of A$AP Rocky’s new album. It’s one of those albums that has felt like it’s been right around the corner forever, yet took forever to arrive. Small hints and teases have been abundant, whether in the form of merch, tweets, interviews, or even mysterious drops on Soundcloud. Rocky has been “Testing” the waters in a sense and after almost exactly three years, he has released a solo project to the world again in the form of Testing. A$AP has received criticism for his music seemingly taking a backseat to other endeavors, which may feel valid, but in reality he has been fairly active despite not having a solo project. Between features and compilation albums with the A$AP mob, there’s been plenty of Rocky music in the midst of the three year drought. Fans are ready for him to stop testing their patience and finally release the long awaited album. It has been shrouded in mystery and test dummies have been at the forefront of the visual campaign, so how that relates to the actual music is a mystery. When you couple his great debut album and impressive follow up with the three year wait between projects, expectations are through the roof. It’s time to see if this is another test that Rocky passes with flying colors.

Testing begins on a promising note, arguably one of the strongest runs that A$AP has crafted in his career. It sets expectations extremely high for an album that already had a multitude of hype surrounding it. In this string of five songs that open the album, the successful experimentation comes to the forefront. Whether it’s the literal distorted bassline that bleeds into Rocky’s vocals seamlessly on opener ‘Distorted Records’ or the beautiful sample of Moby in the latter half of revamped single ‘A$AP Forever’, these are areas where A$AP’s testing of sounds and ideas goes well. Left field collaborations like ‘F**k Sleep’ with R&B Goddess FKA Twigs shares a similar fate of treading the experimental line successfully. Diddy brings his shit talking to the irresistibly catchy ‘Tony Tone’ which has a flow that embeds itself into your head and fails to leave. This five track run ends with ‘Praise Da Lord (Da Shine)’, another potential single that brings English rapper Skepta along for the ride. A flute-like instrument is the backbone behind the production here and is just as catchy as songs like ‘Mask Off’ that Future implemented to great effect last year.

One of the main criticisms that has always been given to Rocky is that fans never really get to hear anything under the surface level in his music. While he is incredibly talented at delivering raps that drip in swag and charisma, sometimes it feels like the flow and presence is used as a crutch in lieu of substance. He does his best to combat these critiques in the album’s home stretch. The drugged out Euphoria of ‘Kids Turned Out Fine’ finds a more melodic leaning Rocky crooning about the relationship of kids, parents and drugs. He reminds parents that although they may worry about their children, there was a time when they were probably just as rebellious. There is a lot going on in this song and while it doesn’t always feel perfect in tone or melody, it is at least committed to its message. The Dev Hynes assisted and produced ‘Hun43rd’ finds A$AP back in the lane that initially brought him popularity in the first place during his Live.Love.A$AP. days. It masters the cloud rap sound that Rocky frequented in the earlier parts of his career.

Rocky ends the album on a high note. ‘Changes’ is possibly one of the best songs of Rocky’s career. The three part, five minute epic goes from interpolating Andre 3000 to him rapping over acoustic guitar lines, to distorted basslines and then back again. We get to hear some insight into his relationships and views towards his fame and everyday life. The same could be said for Frank Ocean featuring and Lauryn Hill sampling closer ‘Purity’. Over immaculate production, and a beautiful sample, Frank Ocean reminds us that he raps for fun and still raps better than most people working today. His verse consumes the first half of the song and effortlessly weaves introspection, wittiness and metaphors into it. A$AP’s verse closes out the song and album with his strongest verse of the album. It is the rare occurrence where you really feel like Rocky is peeling back the glossy sheen of his persona and letting you see into the mind of the man for once. He mentions the death of his sister, not visiting his niece, losing someone close to him every album release and many other reasons he is “coming undone” as the songs sample repeats. His verse barely stays in the beats loose pocket, almost as if he is spewing as many thoughts and regrets from his head as he can before he forgets them. It is a welcome change and leaves listeners wishing that he tapped into these emotions more often.

For everything good that came out of experimenting for Rocky, like most tests, he came up short in some areas. The album is inconsistent as a whole. Even during its best tracks, there will be moments that leave you scratching your head. It’s almost as if he couldn’t stay focused on one idea for the duration of a song’s runtime. Even though we get a few moments of welcome introspection, the lack of emotion behind the delivery on many of the album’s verses leave the listener feeling indifferent towards them. There is no shortage of interesting ideas on the album, and on that front it easily lives up to its title, but sometimes you can’t help but wish that Rocky would stop being so apathetic towards the delivery. Whereas many of his contemporaries can elevate a sub par song off of their emotion and delivery alone, A$AP almost tries to convince you that he could make high quality music in his sleep.

Where the front and back of the album thrive because of interesting choices and successful experimentation, the middle section drags as a result. ‘Buck Shots’ is bound to be riot inducing at shows, but in reality, A$AP has crafted this same song with odd results and not sounded on cruise control while doing so. The same could be said for ‘Gunz N Butter’ and ‘Brotha Man’ as well. Both of these songs are all over the place in direction and instead of that sporadicity keeping listeners on their toes, it just makes listening a chore. The middle section as a whole drags and most certainly does a disservice to the strong runs that start and finish the album. After hearing Pusha T’s fantastic new album Daytona which is an exercise in trimming the fat, and released the same day as Testing, it makes you wonder how much stronger this album would be cut down to ten songs.

What Testing ultimately results in is less than the sum of its parts. There are great moments and tons of ideas to love throughout the album, but its shortcomings end up not making you want to return for repeat listens. Rocky’s past albums have all had consistency as one of their strongest attributes and Testing is in direct contrast to that. What starts off strong ends up muddled and ultimately disappointing. For such a long wait, the ambition should definitely be commended and you can see that Rocky puts a lot of time into crafting a luxurious piece of art, but forgets that the simplest ideas are sometimes the greatest. If we could get a behind the scenes look at A$AP’s creation process for this album, it would probably be best represented by a white board that is completely full with almost no comprehensible direction. Testing is your brain on drugs. You write down a bunch of ideas while you’re tripping with friends and then when you sober up you laugh and realize that half of them were ridiculous and the other half were actually kind of cool. Rocky kept all of those ideas. That is Testing in a nutshell.