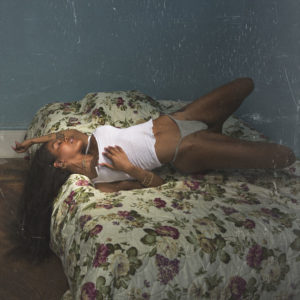 The past month has been both a sprint and a marathon for G.O.O.D. Music. The releases have been cumbersome when you consider the listening parties, live streams, album delays and in some cases even uploading wrong tracklist orders, but despite the struggles, there has been some great music coming out of Kanye’s Wyoming ranch. The releases, while brief, have still felt mostly substantial. It may be easier to equate the G.O.O.D. Summer to a relay, with each member passing the baton to the next with each passing week. Pusha T started the race with his excellent Daytona album, and Kanye, Cudi and Nas have since run a leg to mixed results. That Kanye chose Teyana Taylor to anchor this race may surprise some, as that position is most commonly saved for the fastest on the team. That’s not to discredit the multifaceted artist that Taylor is, but more so point out how strong the acts preceding her have been. It’s been 4 years since her last album and after all that time, she returns with K.T.S.E, which, packaged as part of the Kanye produced string of albums, finally feels like her step into the spotlight. She may not be the most high profile artist in this slew of releases, but could K.T.S.E. prove that she is the dark horse that brings home the gold?

Teyana immediately jumps out of the gate with a swagger and presence that you’d expect from someone that’s been waiting for their time to shine on opener ‘No Manners’. A glorious symphony of strings unveils the album as Taylor croons about not having any manners despite having a man. It’s an interlude as brief as it is bold and sets the tone that Teyana is ready to be heard. What follows after is a strong run of soulful, sample heavy tracks that would sound just as good twenty years ago as they do today. Throughout the G.O.O.D. Music run of albums, Kanye’s production has been mostly strong with only a few hiccups, but here, he pairs Teyana with a soundscape that not only fits her sound, but enhances it.

This sensational pairing remains a highlight for the duration of the album, but shines brightest on the two songs that follow the opener. The first is The Delfonics sampling ‘Gonna Love Me’, which is a sultry slow jam that will have listeners two stepping through the house on a Sunday afternoon. Teyana’s voice has a lightness to it that makes it float like a feather, but also a slight raspiness that gives it texture and separates her from some of her contemporaries with similar airy vocals. She does a great job throughout the album of incorporating her hooks and verses into the sample heavy production. It is not uncommon for an artist to get overshadowed by a sample, but Taylor finds the perfect balance. ‘Issues/Hold On’ picks up right where ‘Love Me’ left off. There is a soft guitar line that drives the melody and somehow even Kanye adding laser sound effects behind the vocals doesn’t take away from the lush mood that is created.

If many people were unfamiliar with who Teyana Taylor was as an artist coming into this album, she does her best to cover her wide skill set in the albums short runtime. Listeners receive some much needed insight into Teyana the singer, wife, mom, and entrepreneur on album centerpiece ‘Rose In Harlem’. She raps over The Stylistics vocal sample about everything from fake friends in the industry to critics that wonder what Teyana is even famous for. ‘Harlem’ showcases Taylor’s versatility as an artist and once again proves that she is a multifaceted artist that has something to say with her music. Towards the end of the album, she delivers the sweet ‘Never Would Have Made It’, an ode to all of those that have helped her make it to this point in her life and career. It would have made for a fitting ending and if her album had followed the seven track format of the other G.O.O.D. releases this month, it would have done just that.

Unfortunately, K.T.S.E. was stretched one song too long with ‘WTP’. While it is clearly an attempt to follow the international success of Kanye’s ‘Fade’, which Teyana starred in the video for, it feels like an unnecessary add on here. It may find some success in clubs as it follows the Euro dance formula, but it ruins the ending of the otherwise spectacular R&B record, ultimately feeling like a bonus track. It’s a small blemish that wouldn’t stand out nearly as much if it didn’t stray so far from the albums tone, but it’s a blemish nonetheless.

It is also hard to review this project without mentioning the mess of a release and even messier aftermath. Fans sat by impatiently waiting for the album to find its way onto streaming services on Friday only to be disappointed that it wouldn’t arrive until early Saturday morning. The album was slightly different than the one fans heard at the live stream just hours before. One track was missing, the mythical Lauryn Hill interlude was nowhere to be found and other songs had been changed due to some sample clearance issues. Take ‘Issues/Hold On’ for example. The version played at the live stream had a beautiful interpolation of Sade’s ‘By Your Side’ in the songs closing moments only to be mysteriously missing just hours later in the official release. Things have only gotten stranger in the days since as Teyana herself admitted to being disappointed in the version that ultimately found its way onto stores & services and blamed it on a “misunderstanding”. She then said that a re-release of the album would happen a week later, but whether or not that comes to fruition is still to be seen. Either way, it seems disheartening that an album this good isn’t even the full vision of the artist that created it.

Through all of the trials and tribulations, Teyana has remained positive, almost confident that her time to shine would one day come. If K.T.S.E. is her anchor leg of the G.O.O.D. Music relay, then she broke away from the pack and crossed the finish line in 1st for the team. The short album somehow manages to pack in it something for everyone to enjoy from Teyana. The fact that she can go from raunchy seduction about ‘3 ways’ alongside Ty Dolla $ign, one of music’s raunchiest, to heartfelt anthems about her loved ones a few songs later, is truly impressive. Teyana is an artist whose talent always felt more talked about than actually heard. R&B fans have spoken highly of her for awhile, but there was never that clear breakout moment for her that catapulted her into the mainstream. With K.T.S.E., it still wasn’t the most graceful of introductions, but it solidifies her as an artist who maybe had it figured out all along and just never got the opportunity to show us.