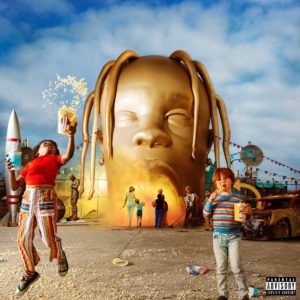 Kanye famously went on stage in 2015 and told fans and fellow artists in attendance to “Listen to the kids, bro.” The speech was a mess, jumping from topic to topic with no clear point that it was trying to reach. The rambling is pretty par for the course with Kanye these days, but his intent to run for president and the “listen to the Kids, bro” proclamation were the moments that stuck out and made headlines. If there is any artist that has heeded that advice or built their whole career on it, it’s Travis Scott. You’d be hard pressed to find an artist that has more of a pulse on the youth and popular trends in rap than Travis Scott. He is simultaneously a chameleon and innovator that increases his star with each release. His latest and long-teased album Astroworld looks to continue that trend. If it picks up where the great Birds in the Trap Sing McKnight left off and couples that with his larger media presence thanks to his relationship and child with Kylie Jenner, Astroworld is set to be his biggest release to date.

Travis knows how to bring people together. On Astroworld he manages to feature Drake, Swae Lee, KiD CuDi, James Blake, Juice WRLD, Sheck Wes, Tame Impala, Pharrell, The Weeknd, and even the elusive Frank Ocean. Those features alone appear in the album’s first eight songs and yet somehow he avoids the pitfalls that other artists with similarly crowded albums suffer. Being a curator may be Scott’s best trait when you take his albums as a whole. None of the songs on the tracklist showcase who the featured artists are and this is probably intentional, both to surprise and to prove a point about how well Travis is at bringing artists into his world. There are some great examples of his curating ability throughout the album. The early standout and surefire hit is the Drake assisted ‘Sicko Mode’. The song is a 5-minute epic ride with 2 beat changes, one teaser Drake verse, another full one later and an entirely different Travis song packed in between. Another early favorite brings along newcomers Juice WRLD and Sheck Wes on ‘No Bystanders’. For anyone that’s ever been to a Travis show, you can already imagine the atmosphere when the song’s “F*CK THE CLUB UP” refrain rings off. Juice WRLD and Travis are a match made in heaven vocally here as well.

Features aside, it has to be noted just how big this album sounds. The scale is off the charts. This project more than any of his that preceded it, feels like a definitive moment and statement. It’s an often debated topic in rap about who the biggest rappers of the new school are and your regulars always range from Drake to Kendrick to J. Cole and now even Post Malone. After this effort and early projections pointing towards 500k first week, it’s time to start putting Travis in that discussion. It’d be hard to name many artists that could get KiD CuDi, James Blake and Stevie Wonder on one song. They appear on the soulful ‘Stop Trying to be God’, but with a lineup like that, that may be exactly what Travis is trying to do. The production amplifies the project’s magnitude even more. Whether it’s the indie funk of ‘Skeletons’ or the lo-fi guitar licks that The Weeknd croons over on ‘Wake Up’, it all feels grand.

Travis does a great job of making Astroworld an ode to the city he’s from and also peeling back the veil on his personal life just a little bit. ‘Houstonfornication’ and ‘R.I.P. Screw’ fit into the album’s themes seamlessly with the latter being one of the best songs of the album’s runtime. Although the album still runs a little bit too long at 17 songs, it does manage to keep the total time under an hour and provides enough variation to keep it fresh throughout. Closing track ‘Coffee Bean’ speaks about Kylie Jenner and their daughter together and is one of the most unique sounding tracks of Scott’s career. The distorted vocals and lush backdrop that Nineteen85 provides is the perfect canvas for Travis to paint his closer on. It’s another wonderful notch on 85’s underrated production belt and a stellar moment for Travis.

There really isn’t much to hate about Astroworld. You definitely get your money’s worth for the price of admission, but like every rollercoaster in a theme park, there are a few thrills that don’t quite live up to the others. Travis doesn’t necessarily reinvent the wheel with his lyrical content here. He mainly sings with the help of autotune and sprinkles in more traditional rapping sporadically. It’s not as if surface level raps can really be held against Travis as he’s been doing it his whole career thus far with a few exceptions. If not for the varied and interesting production, the somewhat redundant lyrics would become a glaring weak point in the album, but they never do because of all of the album’s other twists and turns. The other criticism that someone could have about an album so stacked with guest stars would be Travis playing second fiddle to them. This never really happens as Travis is very good at bringing artists into his creative space and coexisting instead of competing. It would be nice to see Travis take more of a leading role for an entire project though, but that would go against one of his biggest strengths so it’s understandable why he stays in his wheelhouse. You could give another less talented conductor the same features and they wouldn’t craft half the product Travis did here.

Travis kind of snuck up on all of us. It was always clear that he was a star, but he had never quite gotten over that hump to superstar. ‘Astroworld’ changes that. It’s hard to remember an artist increase his sales by nearly 400k copies from one album to the next, but sometime in the two year span since Birds, Travis didn’t just get over that hump, but soared past it like one of the rollercoasters in the once vibrant park the album was named after. Travis has been about as consistent as an artist can be with his albums, but the difference this go around is the names involved and the extent to which they deliver. This album sounds like an amusement park from the year 2050 as opposed to one that’s closed down. It’s both fresh and current, a rare combo in today’s times. It’s hard to think of another artist that would have Stevie Wonder play Harmonica on a song with James Blake singing and KiD CuDi humming. The only person that comes to mind is Scott’s mentor and collaborator Kanye during his magnum opus My Beautiful Dark Twisted Fantasy era. While Travis doesn’t quite reach those highs here, they do share a similarly sprawling aesthetic. Travis has taken his greatest leap yet with Astroworld and the scary thing is that this album is evidence that he could one day be capable of something even tighter and more concise while remaining epic. Travis Scott most certainly took the advice to “listen to the kids, bro.” The decision is paying dividends as they are returning the favor to the tune of 100 million streams first day.