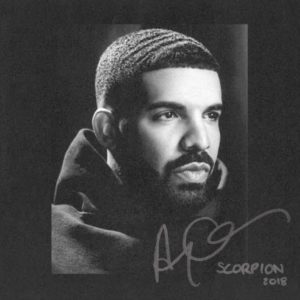 Scorpions are resilient. They can survive almost anything. It’s believed that they can go up to a year without food, survive underwater for 48 hours and even live up to 25 years. It’s no mystery that Drake has staying power and the title of his new album Scorpion was most likely influenced as much by the artist’s zodiac sign as it was the venomous arthropod. Resiliency is a trait that the Toronto born artist has possessed throughout his career whether it be Degrassi jokes, Ghostwriting rumors, beefs or now deadbeat dad accusations. The latter was brought to the limelight in a diss track just over a month ago by longtime foe Pusha T. The circus that followed their spar is well documented and left listeners and Drake in an unfamiliar spot: With questions to answer and something to prove.

Calling Drake the underdog is still a bit of a stretch, but there is an unprecedented amount of intrigue that seems to linger around this release, even for someone of Drake’s stature. While Pusha T and the rest of the G.O.O.D. Music family (and Nas) spent the last five weeks delivering exercises in brevity, Drake has opted for the grandiose instead. It’s always been more Drake’s style when you think about it. In fact his albums always verge on twenty tracks, but this time Drake decided to up the ante with Scorpion and make a full fledged double LP. In the back of most Drake fans’ minds, they’ve always sort of dreamed of an all rap Drake album or an all R&B one and with this project they get both. It’s a bold move and twenty five songs from anyone can become stale after a while as we saw with Migos earlier in the year, but if anyone could pull it off, it’s Drake. His lead up to the album has been one of the most successful of his career singles wise, making Scorpion too big to fail commercially. The real questions surrounding Scorpion are ones regarding quality and consistency. Will it see a return to form from the somewhat disappointing Views for the biggest rapper in the world?

Drake leads off the record with the more aggressive side of the two. Titled ‘A-Side’, Drake uses the front half to deliver as straightforward a rap album as we’ve ever heard from him. Neither side is jaw dropping on first listen, especially when coupled with the expectations, anticipation, and controversy surrounding it. In fact when the clock struck midnight last week, there were really only a couple of moments that resonated as memorable at all. The rest felt like a time capsule encapsulating different phases from Drake’s storied career. Part of this is attributed to the overwhelming nature of the project itself. Twenty five songs, even when broken up over an ‘A-Side’ and ‘B-Side’, is still a ton of music to take in. It’s only after multiple listens that the charm of Scorpion really starts to reveal itself.

Drake is and always has been a certified hitmaker, and the songs here are deceptively catchy. The bridges and refrains almost sneak up on you with how they weave their way into your brain. ‘Nonstop’ lies in the same pocket that ‘Look Alive’ did earlier in the year and produces similar results. You also have songs like ‘Mob Ties’ where Drake gives fans his best Young Thug impersonation. Both have the chance to become hits if given the proper push. The front side of the album also includes established hits in ‘God’s Plan’ and ‘I’m Upset’ as well.

Overall ‘Side A’ is an extremely consistent, 12 song body of work. He answers some of the questions that all of us have been asking for the past few weeks. It’s almost like he wanted to get it out of the way early as if not to bog down listeners with further questions about his personal life. On the Mariah Carey sampled and clear album standout ‘Emotionless’, Drake explicitly addresses the children rumors, and renders them true. He claims to be “hiding the world from his kid” and not the other way around. He does more of a deep dive on album closer ‘March 14’, in which he opens up about a sad situation that he clearly doesn’t have in a place of contentment yet.

Other moments of Scorpion prove that Drake went back and edited some of these songs or rewrote them altogether following the Pusha T beef. Still Drake manages some impressive runs on both sides of the album. From ‘8 out of 10’ all the way through the DJ Premier produced ‘Sandra’s Rose’ Drake really catches his stride. The Jay-Z collaboration ‘Talk Up’ slightly underwhelms from what you would expect of the two rappers, but overall he closes out the front side on a strong note.

The back side, while it has its moments, is more of a roller coaster ride. Despite the mixed bag and stretches that drag, it does have its share of special moments too. The electronic elements of ‘Summer Games’ followed by ‘Jaded’ and number one hit ‘Nice For What’ is a great three song stretch. There are gems like ‘In My Feelings’ which samples Lil Wayne’s ‘Lollipop’, and is another surefire hit for Drake. Ty Dolla $ign also continues his glorious feature run on ‘After Dark’. It really can’t be emphasized enough just how strong some of the songs on Scorpion are. Even the small details like Nicki Minaj’s live performance being sampled on ‘That’s How You Feel’ are done in a unique and fresh way.

There aren’t many flat out objectionable moments on Scorpion. What becomes clear after countless listens is that at its worst it could still only be criticized as average. In fact, had 5 or 6 songs been cut and the two sides been combined, you’d be looking at a great album instead of just a good one. What ends up leaving listeners somewhat empty is the lack of cohesiveness that the albums format forces. A song like ‘Ratchet Happy Birthday’ might have been fun for Drake to make, but in an album that’s already too long, it only further highlights the fact. It’s this lack of attention to detail that ends up making the album drag and could have been avoid if the sequencing was treated as a priority.

Scorpion’s weaknesses lie in the fact that almost everything included on the set is ground that Drake has covered before, both in content and in style. Nothing here jumps off the page as something new or exciting that we haven’t heard from him before. For example the closest parallel to the ‘A-Side’ of the album is Drake’s 2013 If You’re Reading This Mixtape, which is stronger on almost every front. The ideas on the back side were covered better on Take Care and other past albums as well. There’s no ‘Hold on We’re Going Home’ or other showstopper R&B moments that fans were waiting for. In fact, most of the songs could almost be from the cutting room floors of past albums recording sessions. It’s a testament to Drake that even songs that feel that way still make up a stronger album than most of today’s working artists.

There’s a line on the aforementioned DJ Premier produced ‘Sandra’s Rose’ where Drake says that his “classic” would just be “ten of these”. He’s referring to a hypothetical album that would showcase him almost entirely as a lyricist over traditional hip-hop production. Drake is self aware enough to acknowledge the criticisms about him and confident enough to ignore them. In a lot of ways the past couple of years have shaped the Drake we have today and the one who will more than likely stay with us until his run at the top is done. As one of the first major artists to sign a deal with a streaming service, Drake got ahead of the times and a leg up on his competition, as he usually does. In the years since streaming took the forefront, it is clear that his mission has changed with both his music and career trajectory. In his effort to make two separate albums that showcased his different skill sets on Scorpion, what he really revealed is how much better he is when the skills are combined and the ideas tightened. In 2018, Drake is more interested in being the biggest rapper in the world than the best, and there’s nothing wrong with that. It’s not often we get to witness runs like his.