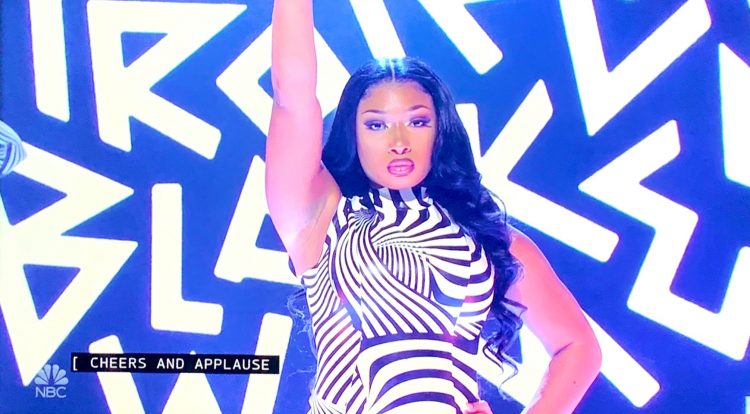 Megan thee stallion was the star guest performer on the season premiere of Saturday Night Live on Saturday (Oct. 3). The show was hosted by Chris Rock.

The rapper performed her hit single ‘Savage’ remix featuring Beyonce, although the latter did not appear with her for the set. Megan also appeared in two skits and most importantly, delivered a pro-black women message that had everybody talking on social media.

A backdrop with bullet holes that had blood dripping out appeared which symbolized black people being constantly killed in America due to gun violence. It also represented her own self being a victim of gun violence (she has accused Tory Lanez of shooting and injuring her). “We need to protect our Black women and love our Black women because at the end of the day, we need our Black women,” she proclaimed.

Megan @theestallion with a message on SNL 🗣 pic.twitter.com/5WB2pXxZ78

In addition, a soundbite of Tamika Mallory was played of her calling Kentucky’s black Attorney General Daniel Cameron saying that he was “no different than the sellout negroes that sold our people into slavery.” The message also appeared in print in the backdrop as you can see from the images above.

Megan later also returned to the set to perform her latest single ‘Don’t Stop‘ alongside Young Thug. Watch it below.

Megan makes her first ever solo SNL debut with a performance of Savage Remix on the #SNLPremiere!#MeganOnSNL